3D printers, in the last year have gotten a big boom. Widely used in industry, academic and even available for personal consumption; they’re used for design and prototyping, and products such as toys, jewelry or keychains. Little known to the public, it’s also been used to develop biological tissues.

One of the latest ideas is to use technology like in-vitro and 3D printers to create meat and leather for public consumption. Better for the environment and without animal cruelty; they could very well become part of the market in the near future. But what are the societal implications of this type of food production and what do vegetarians and vegans have to say about it? 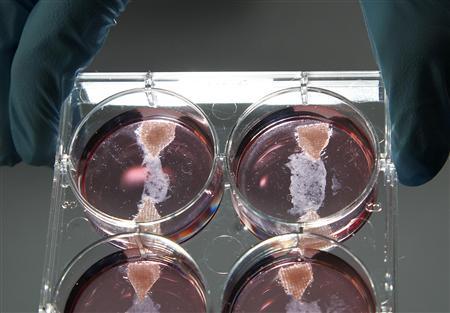 The first lab-created burger was made by a Dutch researcher at the University of Maastricht and tasted in August 2013 in London. The technique was based on cell multiplication, not 3D printing; and it took 2 years and $325,000 to make. The cells were mostly muscle cells and contained no fat, a review by a Chicago based journalist said:  “the bite feels like a conventional hamburger” but that the meat tastes “like an animal-protein cake.”

Although it’s got a watermark, this picture is really funny.

A company called Modern Meadows has also been working on it, being successful in creating Steak Chips in Solve for X , a think tank project launched by Google to incite collaboration to solve global issues, and awarded $10MM by Horizons to continue its research. The founder has already been successful in bioprinting with the company Organovo, which is dedicated to producing biofabricated tissue for research. However, the focus of Modern Meadow is not 3D printing, but different techniques for creating meat. In actuality, the company hopes to be successful initially in creating biofabricated leather and expanding into biofrabricated meat in the future.

Aside from these, other universities and entities have been independently working on their own lab-created meat. A company called New Harvest is also an organization that supports research regarding economically viable meat substitutes.

It’s expected that lab-created meat will be available on the market within a decade or two.

Example of consumer’s concerns about the new meat.

The existence of this meat raises many concerns. For the meat to be available to the public, the nutrient content and safety would have to be evidenced. This would require various trials and approval by the FDA. Some people may still present concerns over the meat; However as New Harvest founder Jason Matheny mentions:

“Cultured meat is made of the same stuff that real meat is made of – but in principle one could make it much healthier by precisely controlling the amount and type of fat.”

Many restrictions on meat consumption are put on religion. The existence of this meat is also an opportunity for religious groups to evaluate their beliefs on food and take a stance on the new meat available. This could prove interesting. As Morton Bast said, when interviewed by Ted:

“It’s exhilarating and awesome to watch a concept as futuristic as printed meat come into contact with a concept as old as religious tradition…Truthfully, I’m desperately curious about the answer…This is definitely a match I want courtside seats for!”

An article in the New Yorker abounded on the consumer’s possible resistance to eating lab-grown meat due to a “yuck-factor”. They go on further to come up with creative bad and good ways to cultured meat could be marketed so people may be more inclined to try it.

The truth is, much of our meat already, although not made in a lab, has had a lot of modifying by modern science.

It’s not natural to put 10,000 chickens in a metal shed and pump them full of growth-promoting drugs. But that’s how [it’s done] now.

So maybe, despite being uncommon to us, cultured meat may be a change for the better over or current meat-producing system.

Debates arise over traditional vs. future methods of meat production.

An interesting article by the Huffington Post argues against lab created meat (IVM=In Vitro Meat), and goes into detail of the issues it could bring. One of them being that due to its high costs, it will not be accessible to everyone:

As IVM will, at least initially, produce inequalities of wealthy meat eaters who will be able to pay for the benefits claimed for IVM – a situation analogous to the current claims made for ‘free range organic meat’.

In order for it to become widely available,  I think the demand on meat would have to be reduced; analogous to the situation of renewable energy today. An article in Hplus Magazine predicts that:

When In-Vitro Meat (IVM) is cheaper than meat-on-the-hoof-or-claw, no one will buy the undercut opponent.,, IVM sales will be aided by continued outbreaks of filthy over-crowded farm animal diseases like swine flu, Mad Cow, avian flu, tuberculosis, brucellosis, and other animal-to-human plagues…Slow-grown red meat & poultry will vanish from the marketplace, similar to whale oil’s flame out when kerosene outshone it in the 1870’s.

Ted Interviewed various vegetarians on their thoughts on 3D printed meat and many agreed they’d try it once in a while. Since more than half of vegetarians claim to be so due to the animal’s wellbeing, we can expect many of them would be shifted towards eating meat again if they had the cruelty free option. One of the interviewed, Emily Soffe comments:

“I don’t have much of a desire to eat meat, anymore, so I don’t know if the introduction of this technology would change my current diet much. Maybe I’d splurge on a good, guilt-free filet mignon every once in a while.”

However, those who are vegetarian for other reasons are not likely to try it;

And of course, in other forums like Yahoo UK, Marquise Phil comments:

“Considering we don’t even need meat I don’t know what the big fuss and resources and millions of dollars being poured into creating meat is about… we’d then be farming animals to be continually stabbing them to remove their cells. Almost as awful. This technology should be kept for where it’s useful – bringing an end to organ donation and allowing people to receive fresh, new and healthy organs”

Although in his Ted Talk, Andras Forgacs addresses this concern and concludes the technology would not be harmful to animals, we can expect more opinions like this as the technology becomes more of a reality.

One of the most active organizations promoting veganism, PETA, has even offered  $1 million to the first person to create in-vitro chicken by March 2014. This competition recently ended, but it greatly advanced research towards lab created meat.

Compassion over Killing, also dedicated an article of lab-created meat and its benefits over commercial meat. This organization is a nonprofit working to end animal abuse since 1995; focusing on cruelty to animals in agriculture and promoting vegetarian eating.

We can expect with these organizations backing it’s likely to get the respect from the vegetarian and vegan communities, although many would choose not to eat it for preference reasons.

Would you eat lab-created meat?

I believe if it was labeled no differently, the majority of people would eat it happily; just like we already do with Genetically Modified Foods. However, if we are given the option to choose, it’ll cause many of us to reevaluate our beliefs on food. Personally, if studies demonstrate that it’s not harmful to humans or animals I don’t see a reason why it shouldn’t be widely available. As a vegetarian, I don’t think I’d eat it regularly due to taste, but as far as the future of meat making goes; I consider myself in favor of the technology. I’d support it as a complete replacement of the current system, and particularly if it was regulated with transparency seeing as how due to economies of scale there would only be a handful of companies producing it; just like with the current system. I’d suggest eating lab meat and developing the technology, especially if  it saves animals and our health from the terrible way it’s produced now.

Your healthy dosage of Sports and Technology.

Because understanding health will give you life

For the time I spend writing what fits the best cheers!

Everything you want to know about sports

Exposing the New and Great!

Reviewing your nightmares one by one.